Option $8.99 give an anchor as a minimum price, then the price $12.99 seems extremely reasonable.

Fill one letter in the blank:

If you see or hear about “EAT”, probably you will fill as “SOUP”.

But if you see or hear about “WASH”, you may think of “SOAP”!

EAT anchored your mind, to generate “SOUP”, and WASH give you information, for you to say “SOAP”.

What is Anchor Effect?

Simply it is a term describes the common human tendency to rely too heavily on the first piece of information offered (the “anchor”) when making decisions.

Should we pay attention?

The first piece of information you hear or see on a topic is going to affect your judgment and perception going forward. Where and how we’re getting initial information could have huge effects on what decisions we make in the future.​

If you are leaders, you must be aware of it when making decisions so it does not cloud their judgment.

Anchor Effect is very commonly used, and you may follow it without intention. 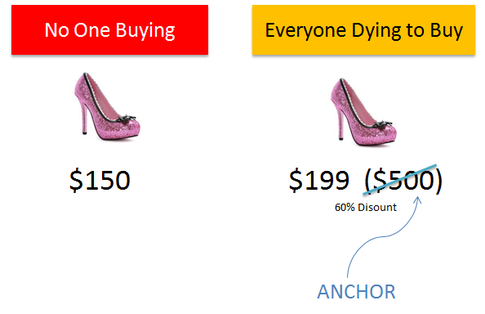 If you work in a result-driven team (such as sales), the leader might “anchor” you by stating expectations of a 50% sales increasing next year. Months later, he lower it to 25%, you breath a sigh of relief because this is less than the initial anchor.

(A moment, think: You could please your teammates just by heightening their target!)

Could we take advantage of anchoring?

Image you added your name to a restaurant waiting list.

Situation 1: You told that you need to wait 15 mins

Situation 2: They tells it takes 30 mins and the room will be available.

In both, it ends up with 25 mins waiting. The one who told 15 mins waiting feels disappointed, meanwhile another one is please because it is shorted than expected.

Another one, if you are negotiating salary:

Believe or not? When the initial anchor figure is set high, the final negotiated amount will usually be higher.

In negotiation, the anchoring effect is one of the reason it is advisable to actively open negotiation rather than waiting for the opposite-one tells you the range. You are able to set the anchor higher.

P/s: As my experience, whatever the reason for it, the anchoring effect is everywhere and can be difficult to avoid. It could be good or not, depend on how you realise and rely on it.